You Are Here: Topological Solitons 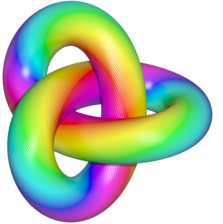 My research is focussed on partial differential equations and variational principles from mathematical physics. I am particularly interested in topological solitons and singular structures occurring in models of condensed matter such as micromagnetic model and Ginzburg-Landau theory.

A current focus are spin-orbit phenomena in connection with skyrmions in chiral magnets. A guiding theme is to understand the mathematical structure of the governing equations or energies that lead to the formation of localized patterns. Using tools from mathematical analysis, I am aiming to capture the qualitative behavior of multiscale systems and if possible to identify effective theories that are simpler to understand, to analyze, or to simulate.

A further direction is the regularity theory for partial differential equations, particularly geometric evolution equations such as the Landau-Lifshitz equation or elliptic systems with oscillating coefficients. Such questions play a central role in the investigation of singularity formation and blow-up or in homogenization theory.